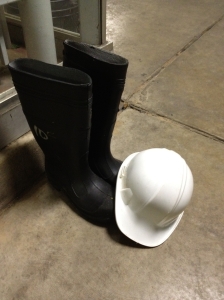 It has been hard trying to live on 10 dollars a day. No movies, no iTunes downloads, no dessert with meals, very little food (unless given to me or paid for by loving people…), no quick purchases in line at a store, and no Starbucks.

However, yesterday, I was having the urge to get a large meal and have some extra cash…so I got a job and made some money.

Many people at the Outdoor Shelter have talked about working for temp agencies around town. One is called “iWorks,” and another is called “Pacesetters.” These agencies provide jobs for homeless citizens (and other people) in need of a temporary job for a day. The jobs can include working at a construction site, a bakery, the AT&T Center, or a local vegetable/fruit processing plant. Many of the homeless have a hard time keeping a full time job, so the temp agency is the best option for employment when the timing is right in his or her life. 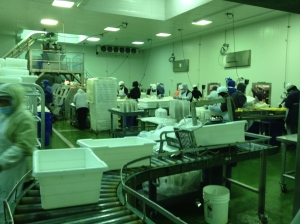 I decided to go through iWorks. I worked at the vegetable and fruit processing plant called, Fresh from Texas,  in San Antonio. Fresh from Texas provides HEB, Wal-Mart, local schools, and other grocery stores with almost all of their pre-cut and prepared vegetable and fruit products. They produce such items as fruit and vegetable trays, sliced fruit, mixed fruit, cut strawberries, stuffed mushrooms, stuffed bell peppers, shish-k-bobs, fajita ingredients, pico de gallo, chopped onions, diced celery, cut cilantro, and bagged carrots, and the list can go on. They do a lot! Therefore, they need a lot of help to keep the 24/7 factory operating and cranking out packaged foods.

To get a temporary job through iWorks, you must arrive and place your name on a list before the workday begins. They open at 4am…so you need to get there early to get a spot in line on your specific workday. There are 3 shifts. Shift 1: 5:00am to 3:30pm. Shift 2: 7:30am to 5:00pm. Shift 3: 1:30pm-Midnight. Regardless of which shift you are assigned…you still need to get there at 4am in order to sign up for most normal working days.

I was hoping to work the #1 shift so I would not have to wait in the temp office (without pay) until the #2 shift began. So…I arrived at the office at 3:30am. Only 7 people were in line…..I was set to go! 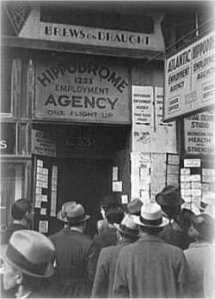 When the office opened at 4am, there were already 40 people waiting behind me outside. It reminded me of a Duke Basketball Ticket line…Or…more like those famous photos during the Great Depression where people would line up in cues for employment opportunities. Despite our lacking economy, I was surprised to see so many people in line and eager (even pushy) to stand in line in order to work for minimum wage.

When the doors opened, we all rushed the counter and put our names on the attendance sheet. I was number 8. Someone cut in front of me…but I let it slide. (Getting in a fight is not on my bucket list!) After everyone was signed in, the lady working the counter called the names for Shift #1. There were 20 spots available. I was excited to start! After 20 names were called…I realized I was not one of them! What!? Something went wrong…I was kinda mad along with the other people in the room who got there at  3:30am! Apparently, if you worked the day before, you get your first choice of shift…regardless of where your name is on the list. It kind of made sense…it was like the Duke Basketball seating…the committee gets the best seats!

After shift #1 left on the vans…all 15 of us waited for our rides at 7am. We just sat there in the cold, empty, and run down office on West Ave. We were assigned our hard helmet and rubber boots. If you don’t bring them back…you don’t get paid.

7am arrived…and I took the shuttle van over to the Fresh from Texas factory near MacArthur High School. It felt strange to be so close to one of the high schools in town…I know that some of my students attend school there….but it felt so far removed. It seemed like I was in a foreign place…an unknown land for this “Woodlands Boy.”

We arrived at our locker room and put on our other mandatory sanitation uniform. A hair net, mouth cover, plastic gloves, plastic sleeves, and plastic apron. I looked like a surgeon in a bad horror movie….only a lot more tired…I had already been up for 4 hours…but still not started my shift.

We were called into the factory. It was 41 degrees inside!

What?  Nobody told me that! I only had on a sweatshirt. Others (I came to find out)  brought jackets, gloves, and even long johns. I began to get worried I would not make it for the full 9 hour shift! (If you leave early…you don’t get paid.) The large factory had multiple large refrigerated rooms for the assembly lines. The floor was wet and slippery, (which is sprayed with foam every few minutes so the floor is somewhat sanitary). The place seemed kind of unsafe…came to find out..it is very unsafe.

According to Workplace Weekly, Fresh from Texas was cited by the U.S. Department of Labor’s Occupational Safety and Health Administration, “with eight serious violations for exposing workers to numerous electrical hazards at the company’s facility in San Antonio, as well as two other-than-serious violations for inadequate record keeping. Proposed penalties total $40,500.” (February 2012)

Jeff Funke, OSHA’s area director in San Antonio said, “Electrical hazards can lead to the loss of a worker’s life by electrocution. OSHA will not tolerate an employer failing to take responsibility for keeping the workplace safe.” I came to find out, there were even some protests by employees.

Read James 5. How are we still like the people James speaks about in the last chapter of his letter?

The Administration has claimed to fix all the safety violations, so I felt real safe. The administration never lies! Right?

Wait…but come to find out…we had to take the stickers off all the bell peppers before we began. The fun had to wait. For one hour, all 9 of us in line had to peel off those tiny little stickers off of each pepper…you know, like in the grocery store. A friend made the joke, “What is ironic…some fool got paid minimum wage to put the stickers on…and we are now getting paid to take them off!” I started to laugh..and wonder…that was probably a true statement.

My hands started to get numb. 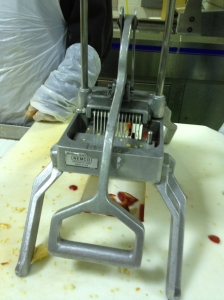 After a 3 minute tutorial, we started up the assembly line belt. It went fast. It was hard to keep up! I had one hand on the giant (and sharp) chopper and one hand grabbing and splitting peppers. I was truly afraid I would chop a finger off…the thing was really sharp and hard to control. All of us struggled at first….but after about 30 minutes and hundreds of peppers later we were finding our rhythm and fine tuning our pace. We were even bonding as fellow workers. It was kind of fun…despite the conditions.

There was Bruce (next to me) sorting out my cut peppers. He was 45 years old and was released from prison 3 days ago in Houston. He was in prison over 5 years…not including a previous time in jail…in the Texas Penitentiary in Beaumont. He was arrested as part of the “Tommy Hilfiger” gang. The gang would steal designer clothes from malls and department stores and take them to Mexico to sell in the markets. Eventually, they were caught and sent to jail.

There was David cutting peppers across from me. He had a construction job during the week…but used the temp agency during the weekend to get extra money. He had a girlfriend,who he said…”was very expensive.”

There was Mario sorting peppers next to Bruce. He was a 65 year old Mexican man who only spoke Spanish. He really struggled with the speed and was eventually let go by my supervisor after putting wrong scraps in the barrels. It really made me sad….but fortunately, he was able to work in the grape line…where it is much slower and relaxed. Heck, you can even eat the grapes!

After 3 hours of working…my arms were numb…and I had a huge headache. It was 10:30am…time for lunch…and what would be our only break for the day! I went into the work room…ate a cold bean and cheese taco…and slept for 30 mins.

This time…I was put on the sorting line…which seems a lot easier than cutting. However…it was much harder to do. The belt went too fast. I started to put the wrong scraps into the barrels. I was afraid I was going to get the “boot” like Mario. However…I got the pattern down just enough to keep my job. Hours later…the new wore off, and I started to hurt all over. I was freezing cold, my back hurt from standing in the same position, my neck hurt from looking down at the assembly line, and my head hurt from thinking about sorting the correct peppers. 3 more hours of work to go…

I was going crazy.

The next 2 hours, I prayed to make it through my shift. I buckled down and worked faster to keep myself active and warm. Toward the end, we got sloppy. Bruce started to get distracted by the girls chopping cantaloupe near us…and stuff started to fall off the assembly line. We were done. The supervisor called it a day. It was 4pm! We got out early.

Bad news. iWork does not take you back to the office to get paid before the office closes at 6pm. You had to find a ride or take the bus.

I took the bus as far as I could…then a friend took me to the office to get my check. It was 6pm now. If you count the 4 hours before my shift…I spent 6 hours trying to get a job and get paid minimum wage.

Temp agencies are good places to find work, but they are a huge waste of time. They might serve a purpose…and try too.

If you count the hours at the Temp Agency and getting back. I made $3.60 an hour.

But it was money!

I bought 2 hot dogs, a chocolate shake, nachos, and drinks that night. I was full…and have much of my money left over.

That night,  I attended a mission trip planning meeting. By 9pm…I was spent…Went to bed in the barn.

William was missing. I had  to be at church at 7:30am. I did not wait for William to get back.

This man was tired.