This past weekend, I got another temporary job that many of my homeless friends go to on Saturday. (Ironically…so do many college students….see what we all have in common!)

To get this job, I did not have to wake up at 3am to make a shift at a temp agency. No. I could get this job anytime between 8am-3pm….and it only takes 3 hours to complete. It sounded too good to be true.

Bad news: you cannot be afraid of needles, blood, or nurses.

I arrived at BioTest Laboratories at 9:30am. (much better than 3) I has to sign in, verify my ID, SS#, and read a booklet on donating. After that was complete, I went through 2 physicals to make sure I was a healthy donor.

You get paid $60 dollars at this location for your first two visits…then around $25-35 for all other visits. It’s not a bad deal.

A nurse called my name and pointed to my chair. I was ready to go. When all the intake procedure was completed (They have a lot of questions…) I got in line to donate. The center I went to has 36 donation beds and machines. They were about 3/4 full so the line was not long.

All the other 5 beds in my section were full and already in the process of giving plasma. All but one person were shaking their feet in discomfort. Was it really that bad?

The nurse asked me for my SS# again, address, and number. They have to verify identity at every check point…for good reason.

Now…I was ready to be pricked.

I have given blood before…but not when they take blood out, take out the plasma, and put the blood back in.

The procedure took over an hour, so I got on my phone and texted a few people. The discomfort was small…but my fingers were getting numb. However, I was amazed by the plasma machine and how it redirected my blood in all the right containers.

The nurse told me to always pump my fist. I understood…but pumping your fist over an hour gets tiring.

I started to wonder. Where my blood would go?
Who would get my blood?
Would people appreciate that their blood came from many homeless citizens?

Plasma often is referred to as the “gift of life” because it is the essential starting material needed to manufacture therapies that help thousands of people worldwide with rare, chronic diseases to live healthier, productive and fulfilling lives.  In order to manufacture these vital therapies, and ensure that there is an adequate supply of plasma protein therapies to treat patients in need, plasma donors like you need to donate plasma at a local donation center.  More facts about plasma can be found here. 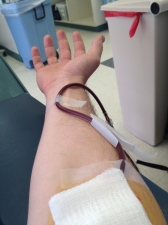 30 mins into the donation my fingers went numb…and pressure started to build up in my arm. Painful…but not that bad.

60 mins…the discomfort grew…and I started to shake my feet to distract the awkward feeling of my blood reentering my arm.  Now I know why the others were shaking…(except that one guy…I guess he is tough.)

Over an hour later…I was done…the nurse unhooked the cords, took the needle out of my arm and bandaged me up.  I sat there for a while so I would not feel sick when getting up…but for the most part…I felt totally fine.

The nurse showed me the way out…and I got my 60.00 dollars.  Wow…that’s a lot in this journey.

After I left the downtown plasma center, I realized that the city was celebrating the life of César Chávez (March 31) and having a parade on the road that was renamed (earlier this year) after the civil rights leader.  Just recently, the SA City Council voted to change Durango Street to “César Chávez Blvd.”)

I wanted to check out the rally and parade.
Community speeches by local leaders were going on all day at the Alamo.

César Chávez was an American farm worker born in Yuma, Arizona, who became a labor leader and civil rights activist for workers rights across the nation. Many of these workers were Hispanic.  Along with Dolores Huerta, he co-founded the National Farm Workers Association in 1962. (Now called the United Farm Workers.)

It sounds quite familiar to my job last week: read iWork on March 24th. For Chávez, “the fight is never about grapes or lettuce…” it has always been “about people.”  Throughout the 60’s and 70’s, he would support farm workers across the nation by helping them seek higher wagers, safer working environments, and improved immigration law though his speeches, fasts, and marches.  One of his largest battles came in the 1970’s when the UFW organized strikes and boycotts for farm workers across the nation.  Strikes such as the “Salad Bowl” strike (the largest farm worker strike in U.S. history) helped gain higher wages for those farm workers who were employed by grape and lettuce growers. 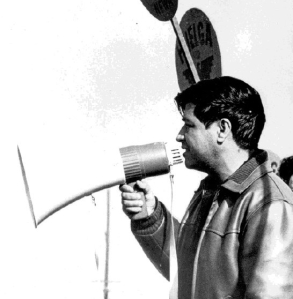 What I found interesting about Chávez was that he undertook a number of spiritual fasts similar to many non-violent leaders in the past.  He treated his fasts as an act of “personal spiritual transformation”.  In 1968, he fasted for 25 days, living out the practice of nonviolence.  In 1970, Chávez began a fast of ‘thanksgiving and hope’ to counter the civil disobedience by fellow farm workers who acted out in violence.  In 1972, he fasted after his state’s passage of legislation that prohibited boycotts and strikes by farm workers during the harvest seasons.  He knew how to really, really fight.  Not with a gun…not with a knife…but with a shovel in one hand and a bull horn in the other.

I now know why many people all across the nation, and especially the border states, place him on the same level of honor as Martin Luther King and Gandhi.

“We cannot seek achievement for ourselves and forget about progress and prosperity for our community… Our ambitions must be broad enough to include the aspirations and needs of others, for their sake and for our own.”  – César Chávez

Man…giving blood was nothing.  I need to go back to the Vegetable Plant…